An illustrated look-back at how the clean and wastewater functions have developed from the 19th century to the present day.

Formed in the late 19th century, the Guernsey Water Company operated as the Island's only water supplier and distributor. By 1920, the company was providing water to 1,850 domestic customers, consuming an average of 550ML (Megalitres) of untreated water each year. The primary water sources at that time were seven wells in the St Martins and Forest areas.

During the next 15 years, the Board constructed the Island's first WTW (Water Treatment Works) at Kings Mills and St Saviours, which utilised gravity filters and chlorination equipment. Pumping stations were built to make use of water flowing through the Island's valleys.

By 1930, consumption had more than doubled to 1,100ML every year and it was clear that increased storage capacity would be required. Initially, disused quarries in the north of the Island were purchased to help maintain supplies, but it was clear that demand was only going to increase further. In 1936, the Board proposed the construction of an impounding reservoir in St Saviour's valley which would create a 1,090ML reservoir. The project was agreed and work began in 1938. Work on the dam was halted during World War II, but commenced again in 1946 following the Island's liberation from the occupying forces. The dam was sealed in January 1947, and by April, the reservoir was full to overflowing.

Over the following years, more pumping stations were built, disused quarries purchased and a new WTW constructed at Juas to meet the continuing increase in demand. By 1958 more than 3,400ML of water was being supplied each year. In 1960, a revolutionary desalination plant (then known as a Sea Water Distillation Plant), the first of its kind in the British Isles, was constructed to augment the island's supply during the dry summers. It was situated at La Hure Mare in the Vale, and was able to distill 80,000 gallons of seawater into 20,000 gallons of raw water each hour. The plant was reasonably successful for a few years in allowing the island to keep up with customer demand, particularly during the dry summers of 1964 and 1965. However, the plant proved to be uneconomical to maintain and was decommissioned shortly after 1970 in favour of increased above-ground water storage in mined-out quarries and other storage reservoirs. To learn more about the desalination plant, the Official Opening booklet from October 22nd 1960 can be viewed by clicking the button below. 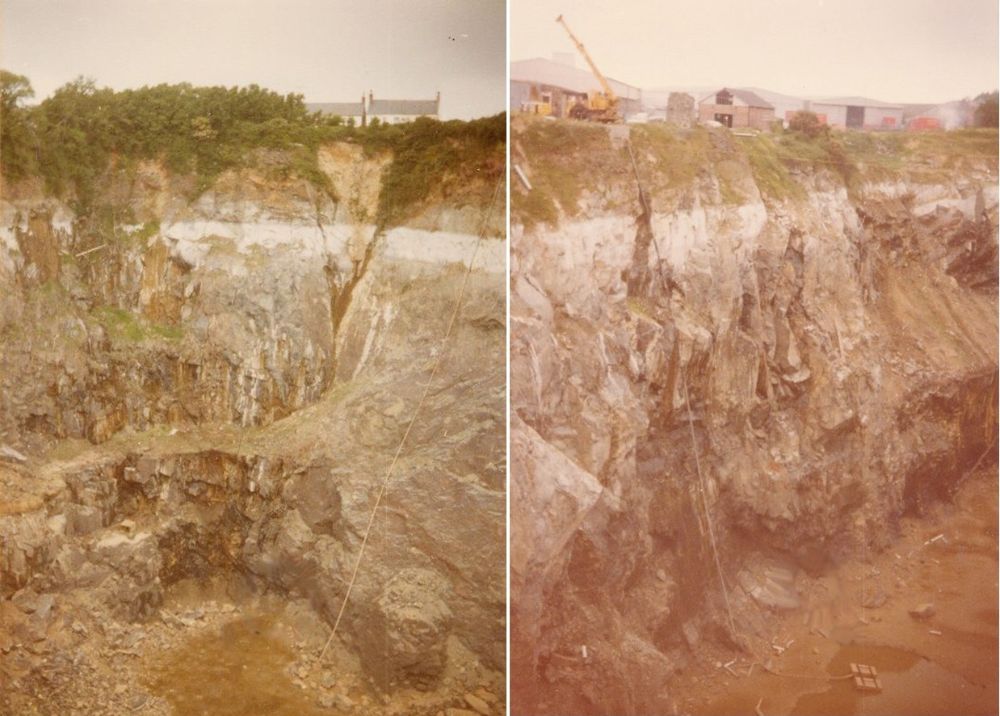 Demand was up to 5,000ML a year by the hot summer of 1970, so the Board agreed to purchase Longue Hougue quarry. This extremely deep reservoir can store 1,160ML of water, more than a third greater than the St Saviour's Reservoir, and is a major component in the Island's water storage infrastructure.

The Review of the Machinery of Government in May 2004 resulted in the amalgamation of the States Water Board with States Works, Guernsey Technical Services, Harbours and Airports into the Public Services Department (PSD). The former States Water Board was renamed Guernsey Water, a business unit of PSD.

PSD was responsible for the delivery of key services and the provision of essential Island infrastructure which facilitated the movement of people and goods on, to, through and off the island by the provision, management and maintenance of Harbours, roads and the Airports. It also secured the supply of fresh water and removal of foul water.

In 2010, Guernsey Water started working more closely with PSD's wastewater function, and from the beginning of 2012 the two functions were officially amalgamated, completing the water cycle under the Guernsey Water brand.

A further change in governance occurred in 2016, when the public sector reform changes lead to Guernsey Water becoming part of the States of Guernsey Trading Assets, with board representation by the States Trading Supervisory Board.

Historically the wastewater network was developed as an open channel surface water network through the town's streets, then progressed to becoming a closed pipe system in addition to accepting foul water flows as this was thought to be a contributing factor to the Cholera outbreak of 1832. This historical combining of flows is now a stumbling block in the way of sewage treatment and the separation of these flows has become a priority for Guernsey Water.

The network was progressively extended through the towns of St Peter Port and St Sampsons during the late 1800's and early 1900's and then into St Martins and the Vale areas until the mid 1960's when a pumping station and long sea outfall were constructed at Belle Greve. Approximately 99.7% of the island's wastewater is now pumped or gravitates to the Belle Greve Wastewater Centre (BGWwC) while the remaining 0.3% is discharged through a short sea outfall at Fort George. Investigations are being carried out to decide on the future of the outfall at Fort George. 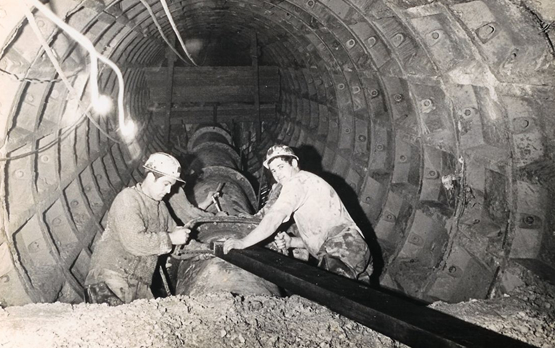 Shot of the construction of the old long sea outfall

The Island's surface water drainage system has been developed through the years in order to drain land for development such as the Mare de Carteret School and playing fields. The urban network was generally combined with the foul water until the 1970's and the need to separate the flows in order to prevent flooding and to reduce foul flows to a future treatment system has resulted in surface water drainage being installed in some of the major streets in St Peter Port. This programme is continuing and has reduced the incidence of flooding in the St Peter Port area.

Following the commission of the Belle Greve pumping station and long sea outfall, a trunk sewer (a larger-diameter length of pipe transferring sewage from one catchment area to another) was constructed westwards across the Island to enable west coast properties to be connected to the network. This required the construction of major pumping stations at Vazon and Cobo.

More recently, the network has been extended to Creux Mahie to intercept the flow being discharged to sea, and a pumping station installed to divert flows back to Belle Greve. The old Belle Greve headworks was refurbished in 2012-13 to create a new wastewater treatment centre (BGWwC; inlet works shown below left) which is housed inside a building with full odour control, and utilises modern industry-standard screens and grit removal equipment. The state-of-the-art mechanical screens remove grit and non-biodegradable material larger than 6mm in diameter. Washed and compacted screenings and grit are transported to local landfill sites for disposal. Once the non-biodegradable content has been removed from the flows, the remaining biodegradable elements are quickly broken down through natural processes in the receiving waters without detriment to the natural environment.

In addition to the above, a new storm-water storage tank has been installed in order to increase the capacity of wastewater that can be held during peak flows, preventing the need to discharge untreated overflow into the sea. The new storage capacity has been created to cope with a 1 in 30 year storm of one hour duration.

To add further background to the development of the new wastewater treatment centre, in 2012, following results of a scientific study of the receiving waters by global experts Intertek Metoc, the States of Guernsey agreed that the Island's wastewater could continue to be discharged into the Little Russel provided that all non-biodegradable material was removed. The Metoc study provided firm evidence that the Guideline Bathing Water quality compliance standard at the designated bathing waters could be achieved without the provision of further sewage treatment, due to the unique characteristics of the Little Russel. However, it was acknowledged that better grit and litter removal from liquid flows was needed - hence the need for the BGWwC.

As the final phase of wastewater improvements, the old short and long sea outfall pipes were replaced in 2015 with longer pipes, which were able to discharge wastewater further out into the Little Russel, improving the dispersal of the flow (shown above right).

View Our 6 Outcomes
Top
Have a question or cannot find what you are looking for? Try our support pages. Go
Happy to help